Your Partner in Creating Lasting Places 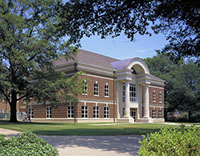 Begun in 1839, Christ Episcopal Church of Little Rock needed a lot of attention in 2003.  After burning twice and being rebuilt, numerous additions and remodeling, and years of making accommodations, it was time for rethinking how to use this facility.

Allison was hired to assess the buildings’ condition, parish needs and desires, costs, and timetable.  A master plan for the redevelopment was created, and with the input of parishioners, priorities were set.

Desiring to reinforce its historic role in downtown Little Rock, the Church wanted a major performance space.  Therefore, the initial focus was to renovate the second level meeting hall.  Stained lay-in ceilings were removed to expose original timber trusses that were repaired and refinished.  New lighting fixtures illuminate the ceiling, and wall sconces warm the room.  Wainscoting was applied to the walls to protect wall surfaces and reinforce the Craftsman detail.  Hardwood floors were refinished and the stage reconstructed with appropriate lighting for performances.  And a new fire exit was created for life safety.

In the future, according to the master plan, additional office space will be carved out of current attic space, and a new porte-cochere will be constructed at the functional entrance to the Church on Scott and Sixth Streets.  To mark it’s prominent downtown location, a carillon tower will be constructed that will display banners announcing current offerings.

Built in 1916, the Conway County Public Library is one of two remaining Carnegie Libraries in the state of Arkansas.  In 1991, the community had outgrown the original building and initiated a funding drive for an expansion.  Allison was hired to create a grant proposal and master plan.  The Phase I addition to the library, completed in 2000, was designed to provide ADA compliant access to the existing building and act as a link to a future Phase II addition.  The basement of the original building was also remodeled to house the children’s collection.

Restoration of the windows and exterior of the building followed in 2012.

Master planning for the Phase II addition has been completed; additional property has been purchased, and fundraising has begun.

On the Project:  Chris Hartfield

In Association with:  HGA Architects

In 2012, the team of Allison Architects with HGA Architects of Minneapolis was selected to renovate the historic Field House on the University of Arkansas Fayetteville campus.  The exterior shell of the building was restored to its original 1930’s appearance, while the interior was completely renovated to become a state-of-the-art performing arts center.

A critical component of the building, the original steel casement windows were repaired and restored for reuse, and the brick and limestone masonry was cleaned and repointed.  Long absent, original wood entry doors were replicated after close study of historical photographs, and the three original flagpoles were replicated.

On the interior, a new concert with a seating capacity for up to 600 patrons occupies most of the main floor level.  The hall has walls of “fumed” Larch and Venetian plaster panels that provide richness, as well as screen acoustical curtains use for tuning the room.  Large lobbies on the lower and main levels allow audience circulation and milling at intermissions, and are also used as event spaces during nonperformance times or for post-performance receptions. Musical instrument and stage storage areas are provided both at main and lower levels, accessed by a double level platform lift.  Performer accommodations are located on the lower level.

Since its inception in 1913, First Presbyterian Church has been a historical landmark in downtown Little Rock, and remains committed to uphold its downtown stature and location. Built in three distinct phases, Charles Thompson was the architect for the original three-story structure. In 1920 and again in 1957, John Parks Almond designed the second and third phases.

In 2001, Allison, along with Lawrence Courtney AIA, was commissioned to produce a master plan for the redevelopment of the entire facility. The plan divided the work into five manageable phases, one of which was the renovation of the sanctuary.

With the unexpected memorial gift of a Nichols & Simpson pipe organ, the renovation of the sanctuary became first priority in order to accept and house the instrument. The congregation also wanted to make changes to the sanctuary to accommodate their liturgy.

The existing chancel platform, with high solid railings, was removed and replaced with a more open structure that accommodates the complex organ casework. This new chancel extends farther into the nave to accommodate desired liturgical changes. The overall sanctuary space was opened further by removing a rear screen added previously, and by increasing the lighting capacity of original pendant fixtures. A new heating and air conditioning system designed to meet targeted ambient noise levels, along with additional electrical capacity were also required for the new instrument.

In Association with:  Lawrence Courtney, AIA

Harrin Hall, located on Alumni circle at the University of Central Arkansas, was the original library in 1929. In 1999 the 15,600 square foot addition shown above allowed the building to expand and accommodate the Division of Undergraduate Studies. This department houses the academic advising center and serves as the location for registration for all incoming freshman. Additional uses within the 26,000 square foot building are computer labs, advisor offices, classrooms, and spaces for freshman orientation. Because the building serves as the arrival for entry-level students, a welcoming front entry was an important component in the design of the addition. This classical stone arch faces the campus green and the student center. With respect to the historical context of existing buildings on campus, the addition is clad in the shared materials of red brick and cast stone. In addition, an architectural code was created to guide future university construction, and ensure continuity of design throughout the campus.

On the Project:  Sarah Goss

Historic Preservation Award for Excellence in

Having outgrown their existing branch, Laman Library made a bold move and acquired the abandoned Main Street Post Office building in North Little Rock’s Argenta District.  A 1931 Georgian Revival design by noted architect, Charles Thompson, the Post Office is a two-story red brick building with a dominant semi-circular portico.  Stylized in detail and a simplified version of classical design, it was listed in the National Register of Historic Places on December 22, 1982. The design challenge was to preserve the historical integrity of the much loved building while incorporating significant space for programs and meeting applicable building codes to create a functional, state-of-the-art modern library. After abatement and removal of extraneous elements added during previous additions, the now double height central space became the main reading room.  In order to honor the historic fabric of the original building, a clear distinction was made between old and new.  White was selected for remodeled spaces to contrast with original finishes of terrazzo, marble, granite, and stained oak. At the south end of the entry hall, an all-glass entrance to a new gallery allows uninterrupted views of the historically significant space. Two new floor plates, flanking the central open space, were added to the existing second floor to accommodate the children’s department as well as the computer lab. Flush glass railings allow for a visual connection between the colorful children’s area and the first floor.  The basement was repurposed to accommodate a 140-seat auditorium and additional program spaces.

In Association with:  Schwartz/Silver Architects

Originally constructed in 1913, Peabody Hall has long been an icon of the University of Arkansas’ academic mission, housing the

College of Education and at various times a teacher training facility and elementary school. After nearly a century of continuous use, it was in need of a major renovation. Allison Architects and Schwartz/Silver Architects were contracted by the University of Arkansas to restore this important historic resource and renovate it in such a way that it could continue to serve as a hub for training future educators.

Project work included the restoration of the exterior of the building, including the removal of several layers of paint on the original masonry surfaces and new windows and doors that replicate the original appearance of the building. The interior was renovated to provide modern academic and office space to accommodate the current and future needs of the College of Education and Health Professions including: six general purpose classrooms, a computer lab, a technology education lab, and a seminar room; 43 faculty offices and departmental administrative offices; and a café for use by building occupants and the general campus. The previously dirt-floored basement was converted to a lobby and loading/unloading area. Building systems, such as HVAC, AV/IT, electrical, plumbing, and fire protection were also updated to modern standards. A new elevator makes the building completely accessible.

The Junior League of Little Rock chose to make downtown their new home, and in doing so, saved one of Little Rock’s most cherished historic structures – the Woman’s City Club.  Now housing the League offices, the building has a new and very active life.  In order to open the grand ballroom for public use, new fire stairs were added along with new heating and air conditioning systems.  A new elevator and ramped entrance provides accessibility throughout the facility, and all new restroom facilities serve the many new visitors.  Now available for wedding receptions and many other varied uses, the building is one of Little Rock’s most popular locations for special events.